One, the warm and welcoming country where I have spent a year and a half of my life, is a world away from the other – an oppressive, prejudicial regime which today joined the epidemic of homosexual hatred that is sweeping Africa.

My friends and colleagues, men and woman of, among others, the Bakiga, Acholi and Buganda tribes are open to outsiders, curious of new cultures and kind and generous hosts, sometimes to an embarrassing degree.

The men and woman who applauded and cheered as the anti-Homosexual bill was made law today are part of another Uganda, but it is this Uganda, the regressive Uganda, which is now at centre stage.

Since I returned to Scotland from Uganda at the end of 2013, the diverging paths taken by the two governments are clear for all to see.

The former decision is part of the wider progressive movement which will not compromise on equality. But this movement is being met by its counterpoint – a movement to spread fear, hatred and intolerance to millions. Homosexuality is now illegal in 83 countries across the world, 38 of which are in Africa. It is a movement gathering pace in other countries too, most notably Russia.

For Uganda, the decision to sign up to be the newest member of the anti-equality club, has many facets.

There is a political expedience. President Museveni, in an effort to sure up support for next election in 2016, is tapping into a long-held belief that outside, colonial influences are on the rise. Since Idi Amin expelled the countries Asian population in the 1972, a decision still popular among many today, Ugandan leaders have wanted to appear tough to outside influences, even if it is to the detriment of the country. In the 1970s, it was the economy that suffered. Today it is equality.

Appearing to stand up to President Obama, Archbishop Tutu and 25,000 people from the UK who have written to the Uganda President against this action will make Museveni more popular.

On the ground, the strong stance against so-called foreign influence can be seen in increasing taxes on foreign owned investment (except Chinese oil exploration) and increased spot checks, and sometimes harassment, of foreign workers. It is a good idea to have a copy of work permits and passports on your person at all times as some have been imprisoned for not showing their papers when confronted by police.

There is the bully pulpit. In a very religious country, where most go to church at least once a week, religious leaders have the opportunity to pour poison into the ears of millions. I have heard it myself – “the abomination of homosexuality” – preached as gospel to congregations from all religions and all tribes. This action is being fuelled by money from right-wing evangelical groups from the United States which promise aid in return for a unashamedly pro-abstience, anti-homosexual message.

There is old fashioned prejudice. Homosexuals are to blame for numerous ills – crop failure, drought, but mainly the spread of HIV. This is just one many myths of HIV in Uganda and across East Africa – in fact rates of infection are now higher amongst hetrosexuals – but it all helps to fuel the feral fear which threatens to envelop East Africa.

Amnesty International has said the passage of the anti-Homsexual bill into law is a very grave episode in Uganda’s history.

I agree, and it will continue this way unless the progressive, welcoming voices that I know in Uganda find their voice against the prejudice and hatred.

I’ll post a longer blog about scaling Uganda’s second highest mountain over the next few days, mostly because it is an amazing experience with very little information about how to go about it.

But for now, and to show just what an amazing experience it was, here are a few pics from Mount Muhabura. 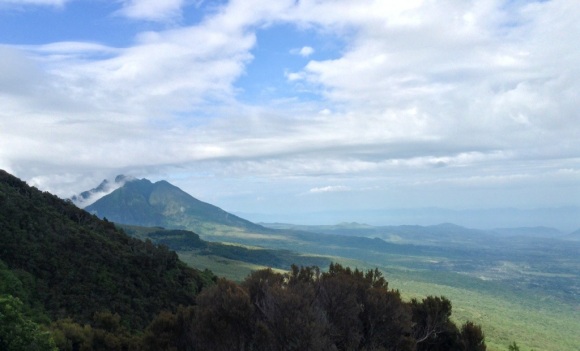 Looking out towards Mount Sabyinyo 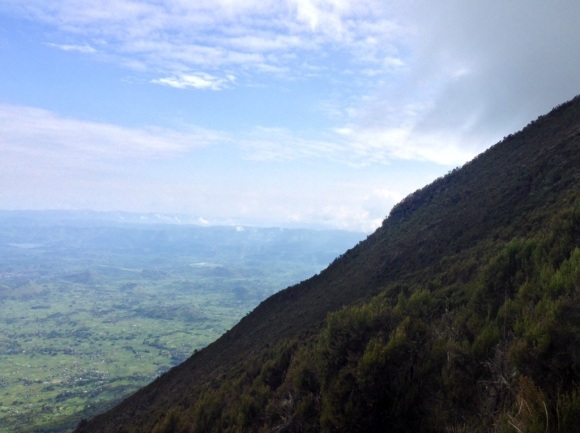 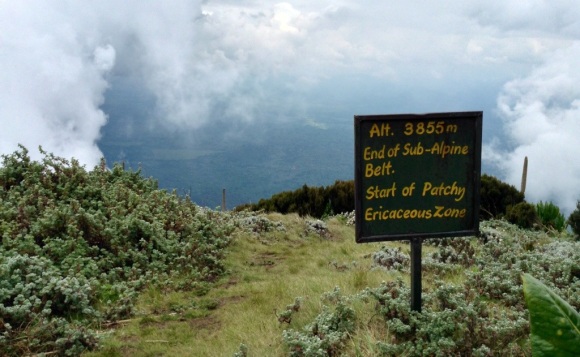 On the final ascent to the summit, ladders were the only way to get up the gradient

Not many places in the world you can go for a swim at 16,000ft, or cross from one country to another. Here is Sam and I in the crater lake at the summit swimming back to Uganda from Rwanda

At the summit. Behind us and below the clouds is Rwanda

With only two weeks until my year long African adventure comes to an end I am rushing to tick off as many things as I can on my Ugandan Bucket List (next up is ascending the 16,000ft peak of Murabura in Rwanda on Sunday). Today I was lucky enough to have the opportunity to spend an hour in the company of one of the world’s most endangered species; the mountain gorilla.

There are only 860 left spread across three countries, Rwanda, the Democratic Republic of Congo, and Uganda.

To stop myself going all Attenborough on you I’ll just finish by saying that if you get the chance, do it. There may not be much time left.

Plus, a picture speaks a thousand words, even if they are the dulcet tones of Sir David. 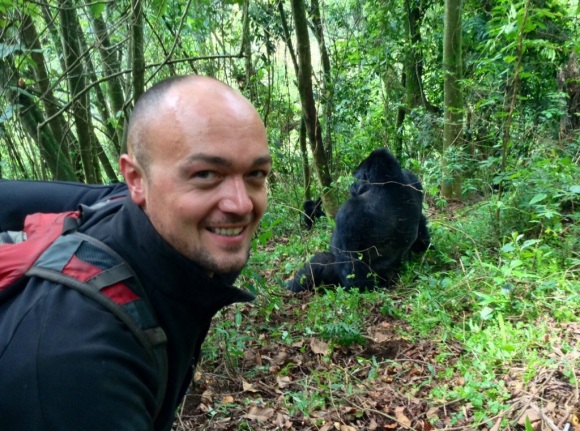 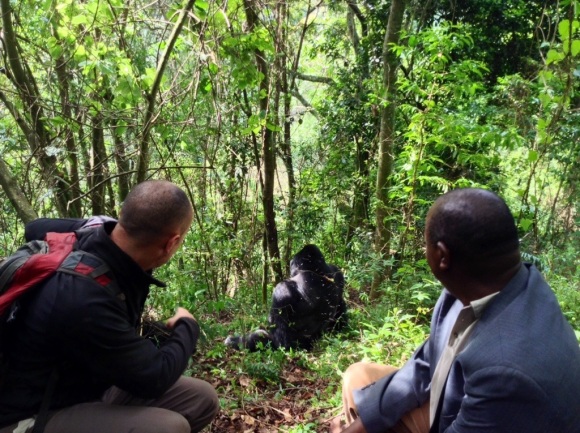 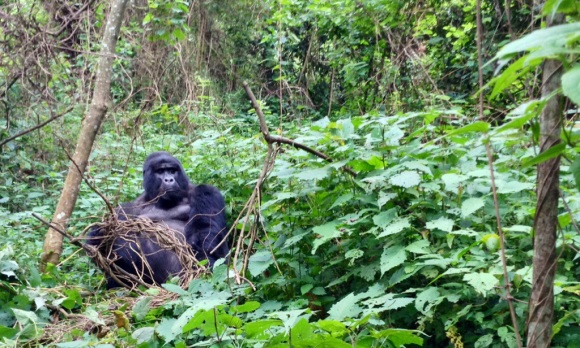